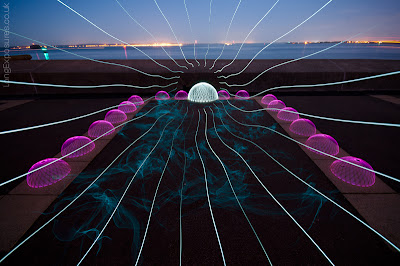 Scientists, IT consultants, mathematicians, doctors, my gran and a geologist. Nope, not the invite list for Party of The Year- it's a cross section of the hundreds, maybe even thousands of people around the world who've been amazed, intrigued and puzzled by The Dome since it first hit flickr in May 2010. And they're going to be even more, erm, cross when they find out just how straightforward the technique is. Well, not my gran if I'm honest - she's all over it. But all the others are true.

Let me say this. I've enjoyed the buzz - who wouldn't? The emails I get every day bear witness to the interest it's created. I think my favourite thing is seeing comments from light painters who've been inspired to reverse engineer the tool and are rightfully proud of achieving that.

But alas, just as numerous dome artists are now springing up around the globe, sooner or later someone's gonna want to get their name in lights with a tutorial about how it's done - so I'm getting in first.

Before I spill the beans though, I need to get out what a relief it is for it not to be under wraps any more. In trying to keep people guessing, I ended up stifling my own creativity for fear of giving out too many clues. For instance - you've never seen me produce a multicolour dome, or a dome with deliberate large gaps. In my mind, both of those would have opened the tool up to close scrutiny so remained on my to-do list for when the shape became as commonplace as the orb. In reality, both have now been done by others (and done well, for the record) and still light junkies en masse are none the wiser.

There's a lesson in there - be motivated for the right reasons.

So, without further delay, let me introduce you to The Dome and tell you not only how to make your own but how to wield it like a pro. 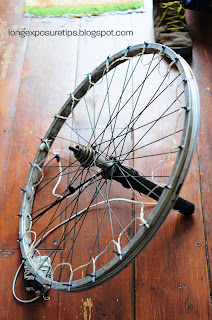 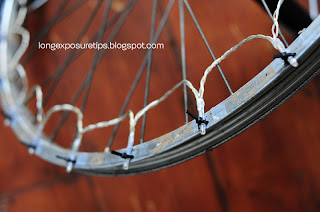 What you do
1) Evenly space the lights around the rim of the wheel.
2) Fix the axle firmly to the wheel's hub.
3) Switch the lights on and roll the wheel around smoothly and at a steady pace. 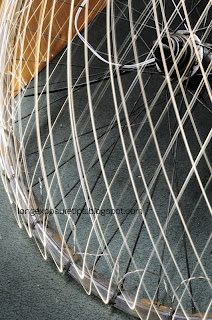 So there it is. Go forth lightly.


One thing I meant to reference in the original post is how because of the whole rolling round thing, domes always appear on a surface... which is why I was particularly proud of this- the first (and so far only) levitating dome